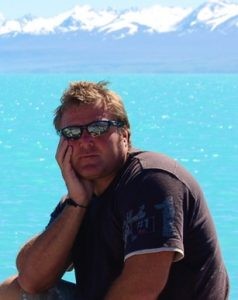 Paul was born in the UK and went to school, college and then Polytechnic, finally graduating with a HND in Art Direction and Advertising. After being forced to move to London in search of a work placement because this was where the agencies were based, he soon decided that ‘The Smog’ was not where he was going to spend the rest of his life!

So … after years getting educated at the tender age of 20 he left the UK. After various ‘non-advertising’ related jobs in the Canary Islands he ended up in Greece where he set up as a sign writer and was introduced to sailing. This was to become a lifelong passion as Paul accumulated many thousands of sea miles cruising, racing and delivering yachts as a freelance skipper … and that would have been that, spending his years sailing the seven seas but something was stirring within, he felt he needed something more fulfilling.

He chose direct marketing and publishing as this catered to his skill set and fitted into his transient lifestyle. Paul came up with the ideas and out-sourced the work, which was all managed from a laptop whilst sipping Sangria in Spain or Rum Punch in the Caribbean.

The first venture into publishing was in 1999 with a series of wholesale related directories known as Sourcebook. These detailed trade sources worldwide. During this time he built other websites that would hone his Internet Marketing skills; skills that contribute to the success of the GAUK Network in these increasingly competitive times.

Paul has a natural talent for copywriting and design and over the years he has helped create extremely busy sites for his own portfolio and on behalf of clients.

‘Government Auctions UK’ was described as ‘an experiment’. Originally, it could be bought as a printed document or downloaded as an ebook. Due to the limitations of the web in those days it was pretty basic and gave people a starting point, a place from where they could enter the ‘secretive’ world of Government and Police Auctions. There were no sophisticated features, yet it contained everything someone needed to track down ‘No Reserve’ auctions.

The book sold well and over the following couple of years proved to be a great success. The Government Auctions UK website took on a life of its own, growing organically through search engine exposure and by word of mouth. However, it became apparent that visitors wanted a grander product than a directory of auction houses so as the web grew more technical, gauk programmers started to develop a system to better deliver the auction information.

It was this demand that drove site development towards something much more comprehensive. What you see today is the culmination of literlly years of research and development.

Government Auctions UK was recently re branded as plain old ‘GAUK’ which fits far more comfortably within the wider network. To ‘gauk it’ simply means to find it cheaper with our services, and is now growing and expanding as fast as programming allows.

After spending a number of years based mostly in Cyprus, Paul now lives with his family in New Zealand where he is developing a strong team to manage the growth and expansion of the GAUK brand worldwide.

Mission Statement: We strive to do the very best in anything and everything we do.

“We know we don’t always get it right; we know we can always find ways to improve, which we do tirelessly. Providing the best information and user experience is what drives us and currently were proud to serve:

And that’s all thanks to our visitors, each and every one of them.”

We have had many imitators come and go in our time, but we are confident none can come close to the quality and quantity of information we provide!

We now have in place a team of dedicated staff who constantly scour the internet for any snippets of information that could lead to a bargain. Furthermore, organisations are able to upload their own information. Although originally the listings were dedicated to government auctions we have gone a lot further in recent years. We now list virtually every auction in the UK, USA, parts of Europe and Australasia with the goal of 100% coverage worldwide. We are also are extending our wholesale, surplus stock, liquidated companies and bargains coverage.

As a developing and forward thinking company we welcome any suggestions you may have as to improvements that can be made and can assure you that any comments will be given full attention.

We have had an extraordinary few years in development and look forward to growing exponentially with you on board as a valued client.