After a couple of years working as a plastics and design engineer for a large firm in Hong Kong, Nick Rutter (pictured below) decided that being an employee just didn’t suit him. 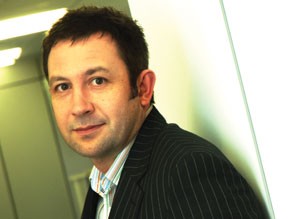 So he returned to Coventry University to finish an electronics course he had started years earlier. There he met Sam Tate and the pair decided to go into business together. Rutter’s experiences in Hong Kong made him wary of competing with big brands, so they decided to target a cheap, mass- produced item where advertising budgets were less important. In short, they wanted a “boring” product. “We picked household safety products because the technology was mature and a lot of the incumbent manufacturers were not being very innovative.” They searched their own homes for products that could be improved and eventually settled on the fire alarm. “When we saw it, badly fixed to the ceiling with wires sticking out, we realised it was the one.” They analysed its faults - “it goes off when you burn toast, it’s a pain to reset when it is going off and it’s difficult to change the batteries” - and set about designing an improvement.

Within 48 hours they’d jotted down a rough sketch of their invention - a smoke alarm that could screw into a light socket. It would have rechargeable batteries that charged while the light was on and powered the alarm while the light was off. “People wouldn’t have to fiddle around with batteries and they could reset it by flicking the light switch.” Idea in place, the next thing they needed was money. They decided to enrol in a 12-week start-up business course run by Coventry University. The course was free and it gave applicants the chance to enter a “Dragons’ Dew-style” competition with a £55,000 grant for the winner. In December 1998 they clinched the prize. “Winning the money was great, but the lessons we learned about starting a business were also pretty valuable.”

Then the pair got in touch with one of Rutter ’s old contacts to work on a proof of concept. Gradually they tested and modified the design until by summer 2000 it was ready. It then took another year of meetings with buyers before B&Q ordered its first shipment. “Getting the product on the shelves is only half the job. You then have to persuade people to take it off them.” The pair, who had already received £260,000 from private investors, wanted to raise more cash for marketing. They decided to list on the stockmarket as Sprue Aegis. “Luckily our new private investors had experience in bringing small companies to the market and were able to attract a lot of interest.” After six months the firm had sold £1.2m worth of the Fire Angel protectors. By 2003 annual sales were £3m. Then the firm tried to crack the American market in 2005.

Sprue Aegis partnered up with US chemical company Du Pont, but the venture was a failure. “We spent lots of money and effort but we didn’t have any success.” Meanwhile, UK sales had sunk to £1.5m. So they broke off the partnership and re-focused on Britain.

Their research and development paid off and the firm was able to bring a host of new products to the market. In 2010 group turnover hit £29m.

Undeterred by their American experience and with the UK business going well, the company is looking abroad again. A recent deal with BRK, inventor of the modern smoke alarm, looks set to open up Europe.